2022 is off and running, and nonprofits are already looking for the best tips, tricks, and trends to elevate their fundraising strategies. And you’ve co[...]

We’ve known for some time that charitable giving to food banks has been off the charts during the COVID-19 pandemic. Now we have the numbers to back that up.

Overall, food banks have seen a 623% increase in new donors, more than doubling the average active donor file from a year ago. And 49% of these new donors gave a gift of $100 or higher.

RKD Group’s first-half benchmark data for food banks illustrates just how unprecedented this time has been for these organizations.

Our Insights team analyzed the full donor files of 78 food banks from across the U.S. In our data, we removed gifts of $10,000 or more to avoid skewing the numbers with major gifts.

A quick glance at the green on the chart below shows that every single metric we track is way up year over year. COVID has not just affected one region or one size of organization; all food banks across the country felt the impact.

Let that sink in for just a moment.

The fact that so many people nationwide stepped up to help feed others during a time of such uncertainty speaks volumes about the trust they have in the work that food banks do and in their mission to end hunger.

While it’s easy to focus on this massive influx of new donors, annual food bank donors have stepped up as well. There has been a 50% increase in giving of core donors – those donors who have given two or more consecutive years – and a 92% increase in second year from new donor retention.

The chart doesn’t even show the 269% increase in giving from donors who had not made a gift in 25+ months.

All of this adds up to a 128.6% increase in gifts, leading revenue to more than triple the numbers from this six-month period in 2019.

It’s clear that this tremendous growth began in mid-March. Looking at the chart below, you can see that 2020 was off to a sluggish start, with January and February lagging slightly behind the 2019 revenue numbers.

When the World Health Organization declared COVID-19 a global pandemic on March 11, the gifts began to pour in for food banks. The revenue increases were as follows:

Through June, giving to food banks was still well above “normal.”

During the early months of the pandemic, we observed direct mail donors changing their behavior to give online, while younger, first-time donors made their digital channel preference clear. That’s why many of the donations from March to June happened online.

When we looked at the digital data for 10 food banks, we found huge lifts in both web traffic and revenue that dwarfed the typical spike seen during the 2019 year-end giving season. 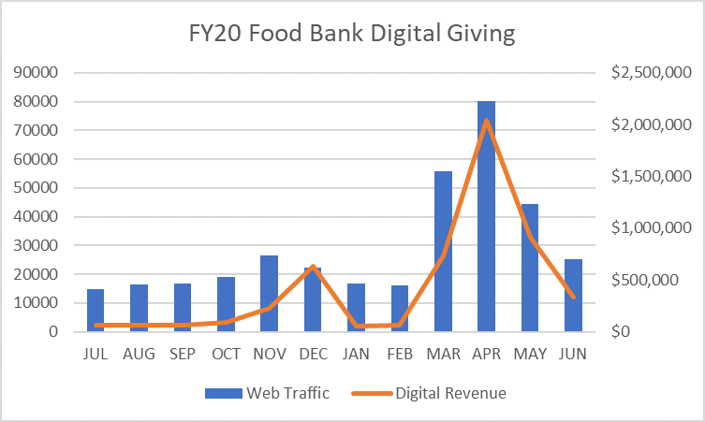 All in all, the pandemic has brought in an unprecedented surge of new donors and much-needed revenue to food banks. And with this, the opportunity to retain these new donors.

As we have seen during previous times of turmoil, disaster gifts are typically “additional” gifts and not “replacement” gifts (i.e., annual gifts given earlier in the year). Therefore, we expect that those who normally give during the holidays will continue to do so this December.

However, what has become clear in recent months is that COVID has created a new breed of food bank donor. These are not just your average disaster donors. They’re also different from the typical food bank core donor and the average digital donor.

Check out our ebook to learn more about the unique demographic and behavioral trends for these COVID donors and some strategies to reach them. Understanding what motivates these constituents will help food banks bring in more gifts this year-end season and convert them to mission-focused donors for the long haul.

Lynn has been serving as a fundraiser, marketer and strategist for local, national and international nonprofit organizations for more than two decades. Using her experience, Lynn helps nonprofits uncover the wealth in their data and make empowered decisions that lead to growth.

COVID at 6 months: Where is nonprofit fundraising heading?