How nonprofits can take advantage of the QR code revival

In the last two years, QR codes have made quite the comeback.

Just take the Super Bowl, for example. Remember that commercial with the QR code bouncing around the screen for 30 seconds? If you’re like me, maybe you geeked out a little bit and immediately pulled out your phone to see what it was all about.

Although it was possibly the simplest commercial in the line-up, it generated a crazy amount of traffic to Coinbase’s app—so much so that the app actually crashed.

And it proved that QR codes are an incredibly effective digital marketing tool.

For nonprofits, use cases may be a little different than a million-dollar commercial spot during the most-watched sporting event of the year. But that doesn’t make a QR code any less powerful.

In this blog, let’s explore a couple of modern ways nonprofits are using this ‘90s tool.

As we saw with the Super Bowl commercial, using QR codes to direct people to your website on TV is highly effective.

Each year, St. Louis Area Foodbank is the featured charity at their local Thanksgiving Day parade. Last year, they used a text-to-give option that was promoted throughout the event. Unfortunately, it didn’t bring in much revenue for the organization.

This year, in addition to the text-to-give option, they also included a QR code that directed viewers to their donation form. The QR code generated four times more revenue than texting. Check out the image below to see how it looked. 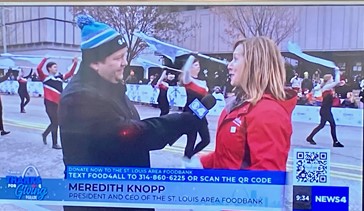 URLs on direct mail pieces have long been utilized to drive web traffic. By adding a QR code into the mix, you’re providing one more visual reminder and opportunity for a donor to engage with your organization in a way that’s more convenient to them.

Nonprofits like Susan G. Komen are in the early stages of testing the QR code’s comeback—and with good reason. Donors who visit Komen’s website when prompted by a direct mail appeal are more engaged (with a 63% lower bounce rate on the site than all other traffic sources) and willing to give (55% conversion rate).

Over the past six months, we’ve tested using QR codes to provide direct mail recipients with a quick path to donate, connect with their local community or consume digital content like podcasts and video.

While there’s a lot more to test and learn, early results are promising. Hundreds of donors have scanned QR codes from direct mail appeals to go to Komen’s website, and while not every test involved a CTA to give, those that did have generated an encouraging amount of digital revenue.

And that digital revenue is above and beyond the gifts QR codes help influence offline.

Take this recent example, where we tested adding a QR code that featured a digital engagement opportunity beside the P.S. of a direct mail appeal. The package with the QR code achieved a 19% higher average gift, while maintaining the same response rate as the control.

The Salvation Army Northwest Division was also looking for a way to mix up one of their direct mail packages. In a test for their Christmas renewal mailing, the organization added a QR code that linked to a Spotify playlist. It was a huge success, beating the control by driving a 15% increase in response rate and a 22% boost in net revenue. 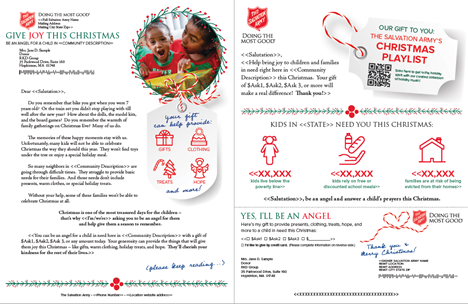 As we face ongoing supply chain uncertainty and the rising costs of materials, perhaps a low or no-cost “freemium”—like The Salvation Army’s Christmas playlist and a well-designed landing page—can be just the ticket to gifting donors something of perceived value, without direct mail campaign costs becoming unsustainable.

We’ll continue to test QR codes in direct mail to better understand how we can help enrich a donor’s experience with an organization and boost fundraising results.

Location of the QR code on the package, destination page, CTA and the type of content being shared are just a few variables with endless opportunities to shed light on what donors find inspiring or valuable. We’ll be sure to look at the results through the lens of different audience segments as well, because we know one size doesn’t fit all.

Whether it’s at a virtual event, on a billboard or through out-of-home (OOH) media, QR codes are great ways to cross in-person advertising with your digital efforts.

My colleague, Mario Salman, recently shared a blog on the many ways nonprofits integrate OOH advertising with digital direct response. And his first example of a printed sign with a QR code linking to a donation form is the perfect addition to this blog.

Needless to say, from restaurant menus to commercials and everywhere in between, QR codes are back and better than ever.

Their ease of use and newfound familiarity make them a powerful tool for nonprofits looking to integrate their website or donation forms with any kind of promotional media.

I look forward to seeing the many other innovative ways QR codes are used to drive giving!

Lianne Raices has a decade of direct response experience and is dedicated to providing customer service to the highest standards. As Account Director at RKD Group, she works to uphold ethical fundraising practices and develop strategies that inspire donors to action. As an analytical, detail-oriented project manager, Lianne's passion for helping others is shown though her work with clients.

Crypto donations: How nonprofits can get started

Global supply chain crisis: How nonprofits can recover over the next 6 months

Capital campaigns: How direct response can support your efforts