Using text messaging to reach donors during a disaster

As we’ve learned from past disasters, text messaging can be an extremely effective way for nonprofit organizations to alert donors of urgent needs and raise emergency funds quickly.

After an earthquake devasted Haiti in 2010, the American Red Cross raised $32 million from texts to the word “Haiti.” This is a large-scale example, but also a great reminder of the power of mobile and texting during times of crisis.

For many nonprofit organizations, texting campaigns provide a quick opportunity to cut through the noise and get straight to their donors.

But there are a few things to keep in mind when it comes to deploying text messaging campaigns.

During normal fundraising seasons, text messaging needs to have a different cadence than traditional marketing.

Although texts have an extremely high open rate, people’s tolerance for receiving texts is much lower than it is for emails and other digital fundraising tactics. For nonprofits new to texting, dipping your toes in first can be a great strategy to test donor response and behavior.

Think about all the political text messages you get during election season. Do you have a lot of patience for constant requests for support? Not a chance.

The same can be considered for nonprofit fundraising asks. Always consider how you can lead people to content on your website or be a source of information. From there, you can sprinkle in asks during key times of year, like giving days, year-end, matching campaigns and disasters.

We recommend messages that include a link taking the donor to your donation page or the content you are promoting. Make sure each page is mobile-friendly and consistent with your typical online branding.

BREAKING THROUGH THE NOISE DURING A DISASTER

As we’ve seen through the COVID-19 pandemic, consumer behavior changes during disasters. People have a higher tolerance for asks, and their emotional response to give greatly increases.

For many nonprofit organizations, sending a text to donors also helps cut through the high volume of emails they may be receiving.

Text messaging is a great way to connect with offline donors through another channel. According to data from a study on the texting campaign after Haiti, three-quarters of those who felt compelled to make a donation had never donated via text before.

When St. Labre Indian School had to shut down their offices amid shelter-in-place orders, they worked to deploy a text message to offline donors, alerting them that they could not access direct mail donations at this time. 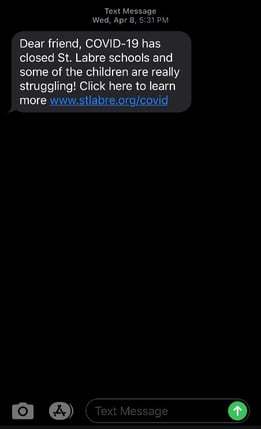 The text encouraged the donors to give digitally during this season and led them to a mobile-friendly donation page that explained the situation St. Labre was facing and gave donors the opportunity to give.

This campaign helped pivot offline donors to online giving and increased website traffic by 531.8% during this critical period for the school.

When done correctly, text messaging is a great tool to reach your donors quickly and alert them to the increased need your cause is seeing, like we saw with St. Labre.

Although this time is overwhelming, remember that the nonprofit community is strong, and communities around the world are coming together to support each other.

Emily is an expert digital fundraiser and marketer with experience optimizing websites, emails, digital media and more. Emily uses her knowledge to craft stories across devices and channels, building relationships with donors and helping organizations increase their reach.

Why you should create your own giving day