By now you’ve probably heard the slew of news stories and reports out of Texas rehashing what will go down as one of the worst winter storms the state has seen in decades.

Power outages, burst pipes, water shortages and frigid temperatures were just a few of the things we Texans endured this past week. And while the impact of the winter storm will be felt for months to come, this was an important reminder of the power of digital fundraising during times of crisis.

As the temperatures dropped to record lows, several of the organizations we work with across the state of Texas were able to quickly take charge of the situation at hand, pivoting email plans for emergency sends and adding lightboxes to their websites to direct incoming users who had heard about the need on social media or through the news.

In this blog, we’re sharing some of the strategies and tactics a robust digital program allows you take advantage of when a disaster strikes.

When major natural disasters hit, nonprofit organizations are often among the list of resources shared out at a local and even national level.

Attention like this drives significant web traffic. Using lightboxes, organizations were able to update new visitors on the urgency of the situation and direct traffic to donation forms or resource pages.

As we all know, you can’t control a natural disaster. The impacts of record snow and ice in Texas not only caused nonprofit organizations challenges when it came to things like food distribution, but also impacted the ways in which donors could respond to help.

While in-person food deliveries were challenging, having an optimized donation form allowed both in-state and out-of-state donors a quick and efficient experience when making a gift online.

Houston Food Bank even took it a step further by creating a special donation form specifically for the winter storm. When donors navigated to the donation form, they were able to get an update on the impact of their gift, choose between one-time and monthly, and select their donation amount all without having to scroll. 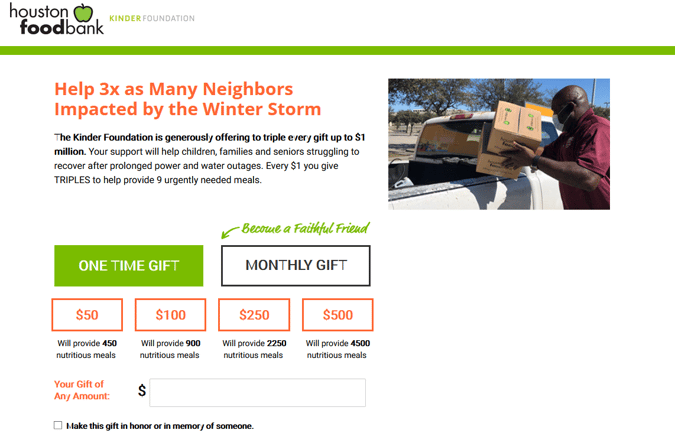 Emergency email appeals are one of the fastest and easiest ways to get word out to donors and constituents when disaster strikes. Having emergency email templates or campaigns that you can easily tweak to reflect the nature of the disaster will allow you to react quickly.

South Plains Food Bank’s email is a perfect example. They didn’t reinvent the wheel when the storm hit Lubbock, Texas. Instead, they pivoted their annual Heat or Eat email with a more relevant message regarding the current state of the community. Simply adding phrases like “this weekend’s massive winter storm” and “in this time of historic cold temperatures” made the email relevant and effective. 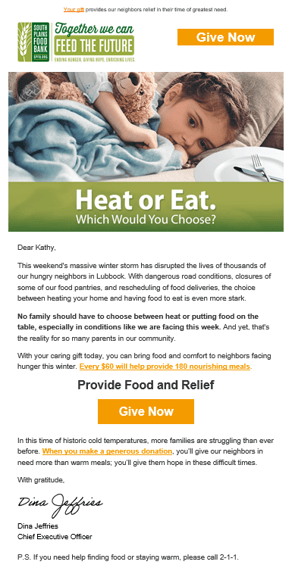 Houston Humane Society opted to create a straightforward but effective appeal that checked in on the welfare of their donors, reminded them of the impact severe weather has on animals and provided a link to their donation form. 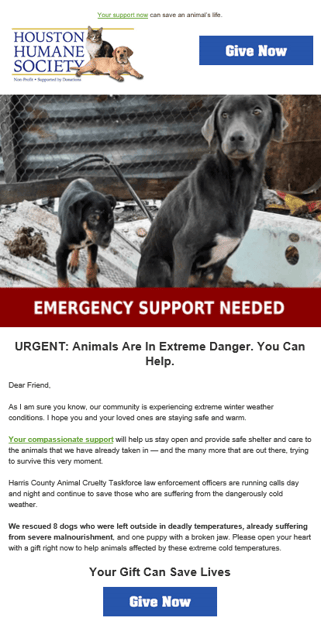 These organizations, and many more, were able to adapt their messaging quickly and effectively at the first sign of severe weather. Having a strong digital presence is essential no matter the season but is especially critical when it comes to responding to disasters like this.

Digital maturity checklist for nonprofits in 2022