What Happened to Giving in December 2018?

Throughout 2018, giving trends were positive. Then came December and a surprise in results for many nonprofits.

Overall giving dropped 2.3%, and online giving dropped 4.4%. Theories have been discussed and debated among nonprofit marketers. Many included estimations of the economy, tax law changes, impacts caused by #GivingTuesday, or changes in the giving landscape.

While these could all have been influential factors, these theories are the result of marketers surveying marketers. RKD and research partner McQueen, Mackin & Associates co-commissioned a study to understand the perspective of donors. 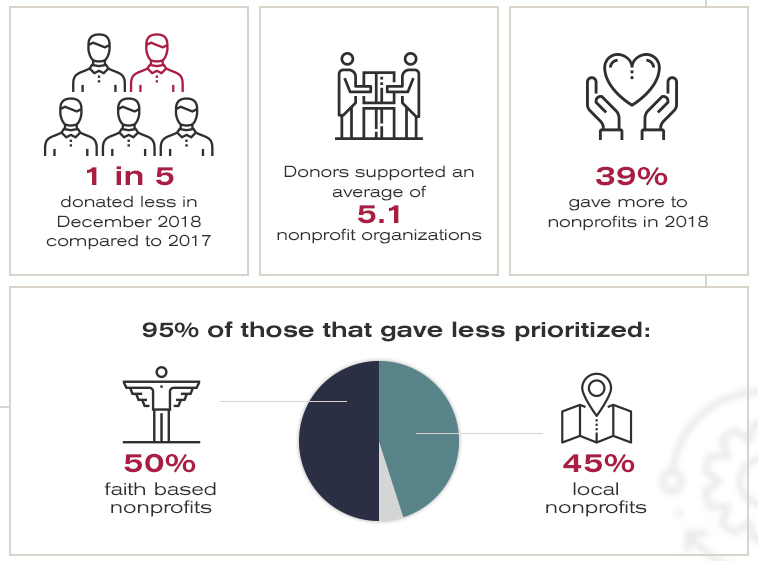 Are donors giving less? The short and simple answer: no. Most donors reported giving more or the same amount of money overall in 2018 as well as in December 2018. Looking further, we see that donors gave to more organizations overall. An average of 5.1 nonprofits were donated to in 2018. What does that mean? The nonprofit fundraising landscape is becoming more competitive. More on this later.

However, 1 in 5 donors reported they gave less in December. And that one—the one that gave less—well, they self-reported a more negative outlook. 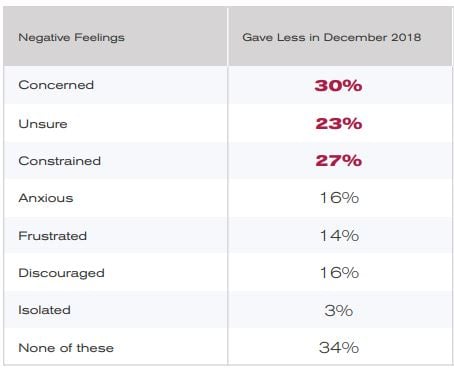 While we understand that donors may report their behavior in part because of finances, we know that fundraising is both art and science.  The art, or emotion, is designed to wed prospects to nonprofit missions.  One of the biggest motivations for giving less: less of a connection to a nonprofit. 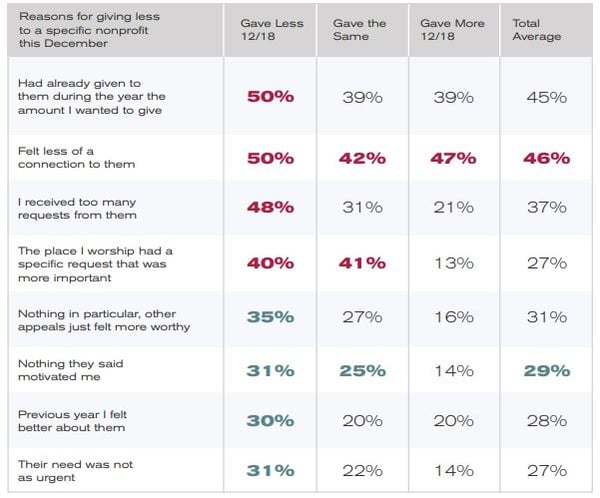 Half of those giving less cited less connection, or a feeling that they had already given enough from the donor’s perspective. This tells us that nonprofit marketing messages need to prioritize relevance and authenticity, as well as personalization, to bond a deeper relationship with donors.

An even deeper point bubbled up related to connection. The top priority for giving among those giving less: faith-related and local nonprofits.
Local nonprofits, like food banks and animal welfare organizations, have historically done well in illustrating the impact of a donation. Articulating impact goes a long way in deepening connection.

Additionally, we looked at #GivingTuesday - one of the biggest giving days of the year. Many in the industry stated that donors would feel less compelled to give at the end of December if they gave on #GivingTuesday. 56% of surveyed donors reported to giving on #GivingTuesday. The differences weren’t as extreme as expected. 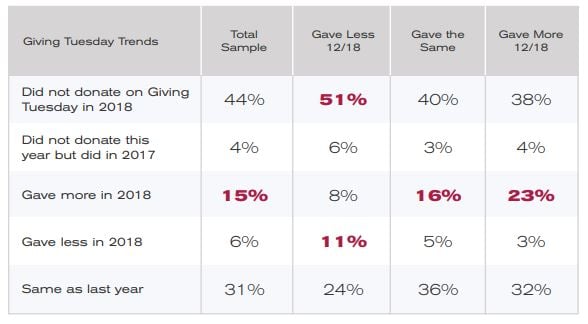 What does our study reveal or remind us of:

1) Donors are influenced by their social/news feeds. December was chalked full of negativity, from the economy to the government shutdown. The weight of seeing this everywhere influenced behavior for some, resulting in a negative outlook and less giving.

2) Donors responded more to Giving Tuesday this year and less to traditional year-end tax deduction messaging but would not say that the tax laws impacted their decision. Instead, they self-reported less of a connection to nonprofits in 2018. This means our messaging and sense of urgency needs to prioritize relevance (we’ve seen relevance in reverse, making the most of current events to drive fundraising).These two things are the most pertinent takeaways: relevance and connection.

These two are at the root of solving issues for acquisition, retention and optimization. They should be at the heart of our strategy and creative.

More December 2018 giving study results and insights can be found in our whitepaper, download it here.

The Thank You Challenge